AVM is a big name in the German router industry, but they’re starting to break into the UK market, most recently thanks to a deal with Zen Internet. Known for feature packed equipment, what does the 6890 bring to the party that other models don’t have?

This combination of features is very unusual and means anyone running a small business can do so via a single router, even when there is not fixed line Internet connection.

As usual with AVM Fritz!Box products the 6890 LTE comes packed with great tech:

The 6890 comes with almost everything you need to get started. At the time of review the model available in the UK comes with an EU power supply, you’ll need to use a plug adaptor as I did for the review.

If you plan on using the telephone system features you’ll be pleased to know you don’t need to invest in new handsets (although if you’re in the market for one check out my Fritz!Fon C6 DECT Phone Review), I set this up with my existing DECT phones.

The one other item you’ll want to consider is a SIM card, which gives you the ability to run your network over a mobile network instead of a fixed line network.

The Fritz!OS is a well refined system that guides you through the setup process. It also has a number of in built wizards to help you with the many features available.

If you have an existing modem/router it’s possible to use this alongside it, something Virgin Media customers like myself have to do.

As well as setting up internet access I also added my SIP phone number to test out the telephone system. Again this was very easy to do and in a short space of time I was connected to the internet and had the telephone system up and running, with calls coming through to my DECT handset and also my mobile phone via the Fritz!FON app.

If you run a small business you’ll be aware how vital an internet connection has become, more so if you’re using an IP telephone number. I once worked for a company that had its internet and telephone lines cut in an act of vandalism and it halted work for the day while repairs were carried out.

AVM have included a SIM card slot (using the classic large standard SIM card size) and mobile modem that allows the 6890 to work without any fixed line connection at all.

You can use this in one of two ways, either as the primary method of connection or as the fallback method.

While setting up the 6890 to work with my EE SIM card I ran into a problem, despite entering all the information the Wizard required a connection to the mobile network couldn’t be made. I contacted the support team who required I download a Fritz!Lab version of the firmware, basically a version that is in development and will eventually be realeased.

Normally the router can automatically download and update it’s firmware, but in this case a simple manual approach was required:

Once I’d completed these steps the issue was resolved and the mobile connection was established.

I asked support if the latest software had been developed spcifically for EE and if users of other UK networks might have a similar issue:

This FRITZ!Lab version was already created in February and wasn’t specially developed neither for the EE network nor for networks in UK in general. But I suppose that the problem that occured in your EE network might be the same that had occured in some networks in Germany, so the problem was already solved in the Lab firmware. The problem in general is: There is a very detailed specification for the LTE standard, and all the providers and networks strictly fulfill this standard… But surprisingly the remote stations of the different providers differ a little bit in some details – as if there was a common language and everyone swears to follow the Oxford Dictionary, but in truth everyone speaks a different dialect… and our modem “dictionary” has to learn all these dialects.

So, if someone in UK – no matter which network – has a similar problem, don’t hesitate to recommend the FRITZ!Lab firmware version which is a preview of our new release firmware version (7.26) coming soon!

If you encounter this problem check the firmware is up to date, try the Labs version and if that doesn’t fix the issue contact the support team and they’ll get the issue sorted for you.

In use I found the mobile internet fallback option worked brilliantly. I forced the failure of my fixed line connection by unplugging the router from the internet and within a few moments the SIM connection had been fired up and the internet and IP telephone were available again.

Of course if you don’t want to pay for a SIM card to sit in the router just in case something goes wrong you can always set up the system to be able to use the SIM card from your mobile, putting it in only when required.

One thing to note if you do this, services associated with that SIM card won’t be available, for example you can’t make calls via your mobile number.

There are a lot of featured packed in to the Fritz!OS, on top of those already mentioned you have control over your WiFi network and guest network, answering machine options, and even smart home control should you have any of the compatible products.

If you’re running a home business or small office business the integrated telephone system is a fantastic feature, not only can it handle your calls and answerphone requirements, it also gives each phone connected an internet extension number, great for quick interneral calls or for the reception area to call the main office.

In a world where we are constantly tethered to our internet connections, it’s a relief to know that is a router available that gives you everything you could need and then adds the option to run a backup connection to ensure you are always online. 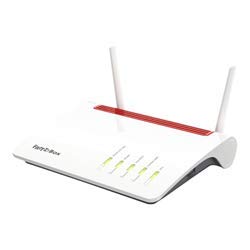 Steam Gaming in your Hands?! The Dragon Touch digital photo frame connects to the internet to allow photos to be easily shared from a mobile phone directly to the frame, no computer required.