I have a long history of using Asustor NAS drives, most recently reviewing the Asustor AS4002T, so I jumped at the chance to check out the AS5304T, AKA the Nimbstor 4.

Sharing a lot of similarities with previous models, the newly released Nimbustor 4 is a personal home storage server capable of housing up to 4 hard disks, hence the Nimbustor 4. There is also a 2 bay version, unsurprisingly called the Nimbustor 2.

Both devices are from a similar school of design as the Asus ROG products, with red highlights and a black, angular body making this a far more interesting looking NAS than you’d expect. 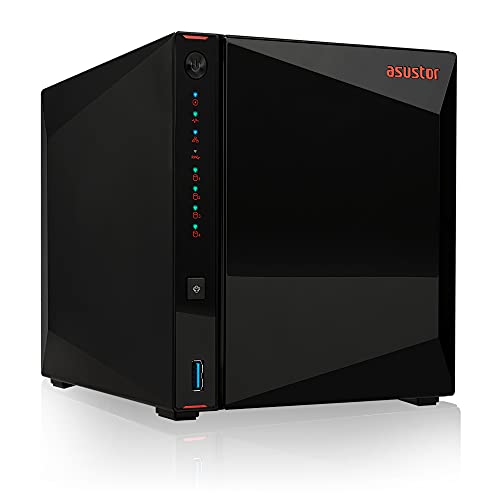 Up to 5 Gbps under Link Aggregation

The previously released AS4002T offered 10GbE networking capabilities, the Nimbustor 4 is no slouch in the networking department ether, offering 2 x 2.5GbE ports that can be used together via link aggregation to give you up to 5 Gbps!

In a home environment, such speed will be difficult to really tap into unless you’re willing to invest in a seriously expensive switch, but the prices of such equipment will fall and it’s good to know Asustor have made their Nimbustor range future-proofed to take advantage of such speeds when it’s economically viable too. If you’re interested in a detailed test of speeds you should check out this Hexus.net analysis.

As well as the 2 Ethernet ports there are 3 x USB3 ports, 2 on the back, 1 on the front. The back also has an HDMI out port suitable to 4k content.

Inside, the Nimbustor 4 is powered by a Gemini Lake Intel Celeron J4105 Quad-Core CPU and has 4GB of DDR4-2400 RAM. This can be upgraded to 8GB, something you may want to consider if you’re doing a lot of transcoding.

No hard drives are included, you’ll need to purchase storage space. I’d recommend the Seagate Ironwolf drives, at the time of review I used 2 x 10TB drives and have previously used the 6TB version for years without any problems. They’re specifically designed for use inside a NAS and the Asustor software also has a dedicated Ironworlf health management page.

Drives are easily installed thanks to the toolless design. First, easily remove the front panel which is magnetically held in place. Take out the disc caddy, unclip the drive holders, pop the hard disc in place and use the holders to clip it into the caddy. Reinsert into the NAS and you’re good to go!

With hard discs installed the next job is to power up the NAS and run through the setup process. If you’ve never used a home network server before you’ll find this process quick and easy, you’re guided through a series of questions and there are explanations for each option (e.g. which RAID option do you want to use).

With setup completed, you’re presented with the main web dashboard, one that has a gaming-inspired new backdrop that looks brilliant.

If you’ve used an Asustor NAS before you’ll be very familiar with the setup, only the backdrop has changed. The web interface gives access to settings, apps backups etc.

There is a great range of options when it comes to apps, Nimbustor 4 is capable of far more than just storage and the list of things Asustor NAS devices can do would need a dedicated website! Handily a lot of the features are listed here https://www.asustor.com/en/product?p_id=62

The Nimbustor 4 features an HDMI 2.0a out port allowing you to connect this to a TV or monitor directly and act as a media playback device. If it’s not near the TV don’t worry, smart TVs can access the content via your network.

There are a few options for doing this, I think the best option is Plex, of which I’m a long-time user and fan and recommend using this brilliant media management software as it works perfectly with Asustor NAS devices.

Looking to store more than just your holiday photos and videos? You’ll be pleased to know not only are there a range of download client apps available, but the NAS can also make use of a VPN via Settings -> Network -> Network interface.

I’ve not yet tried out TV recording via Plex on an Asustor NAS, such functionality requires a USB dongle but as the NAS has 2 USB slots around the back it’s something on my to-do list.

One of the key features I love about all Asustor NAS devices I’ve tried is the ease of which you can access your files anywhere, purchasing the Nimbustor gives you your own personal cloud via a one-off investment rather than ongoing monthly charges.

Remote access is possible via a number of different methods, you access the web interface via a cloud login portal, easily synchronise files with your computer using EZ Sync, or access them on your mobile via the officially released mobile apps.

Of the range of apps available I use AiMaster and AiData, with the mobile version of Plex covering any music/photo/video needs.

My primary use of the NAS is for video file storage. Located in my study, near my PC, it’s proven to be an excellent addition to my editing setup, allowing me to quickly access all my files both locally and on the go.

A secondary benefit of its location is it’s near my printer, a Canon MP610. This is an old printer/scanner, but it’s reliable and there isn’t a reason to replace it with a newer model with inbuilt WiFi. Plugging the MP610 into Nimbustor 4, it was instantly recognised as an external printer and I was able to set it up on my PC and laptop.

Although the PC has always had access to the printer the laptop hasn’t, so this was a real bonus. Worth noting this gives you print functionality only, you can’t make use of the scanning feature, this was the only real negative I’ve found about the Nimbustor 4.

Should you buy the Asustor Nimbustor 4?

If you’re looking to purchase a home network storage solution I 100% recommend the Nimbustor 4. It’s reasonably priced for the huge feature set it offers and is available in a 2 bay version if you want to save some cash.

Remember to factor in the cost of hard drives, think of these as a one-off investment, once purchased you don’t need to pay for storage again.

It comes with a 3-year manufacturer warranty and the few times I’ve ever contacted the official support team they’ve been quick to resolve problems or answer questions.