The Oculus Touch Controllers are the missing part of the Oculus Rift system, bringing it in line with the HTC Vive for functionality.

Like the Rift, the Touch Controllers arrived well packaged and in the box you get two controllers, one sensor, a Rock Band adaptor and two AA batteries.

Each controller takes a single AA batter and they feel very comfortable in the hand. They have an interesting design with a circular band you slip your hand into. I assume the band is a safety feature as it’s already stopped me from smacking my hand on a wall while in game!

Setup was fairly simple. You’ll need an additional USB port to plug the extra sensor and then you start the Oculus setup guide. It shows you what to do, checks sensors are positioned correctly and gets you to setup a guardian zone.

This zone is important to setup as it throws up a virtual wall when you’re Rift approaches the boundary to stop you from walking into a real wall.

Once setup is completed you’re dropped into a brilliant tutorial that really shows off how good the controllers are. It’s a brilliant demo and it’s amazing just how immersed you become, quickly picking things up, putting them down, interacting with them, it’s a fantastic showcase.

It’s great to see software bundled with the controllers so you don’t have to go and spend more right away.

Medium is a creative package that lets you sculpt in 3D. Not being especially creative I’ve not put a massive amount of time into this.

Dead and Buried is a brilliant introduction to how different gaming with touch controllers is. Draw your six shooter and take on other players in western style shoot outs, ducking behind tables and throwing dynamite. For a really intense game swap to horde mode and hold out for as long as you can while waves of creatures come charging at you, they attack from all around and can get right up in your face, it’s amazing!

Toy Box isn’t so much a game, more a technical demo that lets you play in a…toy box! Great way to demo the Rift and controllers to friends and family.

The Unspoken has you casting spells against other players, chucking fireballs, deflecting incoming attacks, summoning help, it’s a brilliant idea and is much easier to get the hang of than you might first expect.

The games I’ve tried as multiplayer and I’ve had problems finding others in matchmaking, hopefully that problem will ease as more people get the controllers.

The only problem I’ve found so far is in long term comfort. After a particularly intense session I found I had slightly sore hands from gripping the controllers, but I suspect that’s just me over doing things and I’ll take more breaks in between games from now on.

Even with that in mind I can’t recommend these enough. If you’ve splashed out on the Rift the touch controllers are a must have addition to your VR setup. Now I just need to rearrange my house to build a dedicated large VR room!

UPDATE: Just tried out Bullet Train and it is AWESOME! It’s not a full game, more like a short concept game, but it’s the closest a game has ever gotten to giving you a Matrix like experience, picking up guns, firing until the clip runs out, casting them aside and grabbing another set.

Since my original review I’ve also managed to get some player on player action in the Unspoken, it’s really good fun but I’ve discovered a bit of a problem. In the game you stand on pillars, most are a little off the ground but some are really high up. I didn’t consider that being stood on a pillar high up in a VR world would trigger vertigo! That’s how immersive the Rift is and being stood up really enhances that. Incredible bit of kit! 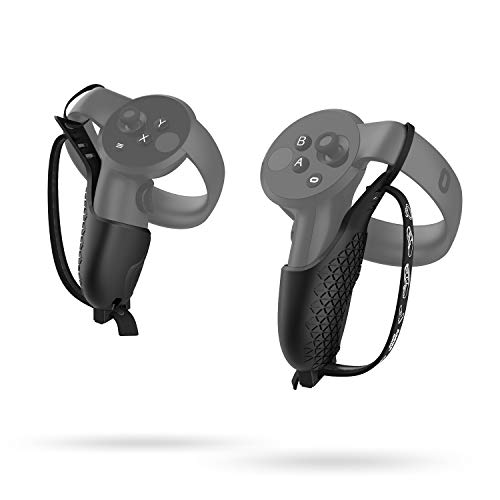